After a week of bus rides, climbs, and overall chaos, Tommy and I deserved some relaxation. We flew to my former state of Terengganu, on the east coast of Malaysia, and then took a Grabcar which is the Southeast Asian version of Uber. Our driver was named Zul and just happened to be a university English teacher. I reminisced about Malaysia with him and somehow we got onto the subject of American sports where he professed his love for the Celtics. Immediately the three of us bonded and speculated about the upcoming series, future roster moves and what the TD Garden is like in person. It made for an enjoyable 90 minute ride to the jetty.

I had been to the Perhentian Islands during my time in Malaysia and was eager to show them to Tommy. The water is remarkably warm and clear, the vibe is laid back, and there are as many fruit shakes as one can comfortably digest. We spent four days there recovering and sunburning. The highlight for me was the four hour snorkeling trip we took where we got up close and personal with a turtle, a shark and a sting ray. On a sadder note, it appears that the coral is starting to become bleached. I can’t say for sure what the cause is, but there was a lot less vibrant underwater color, as well as fewer fish this time around. We laid on the beach- under an umbrella due to the scorching sun- and in hammocks. By the time Tuesday (the 15th) rolled around it was time to send Tommy back. We took the ferry back to the mainland and went our separate ways after two and a half eventful and entertaining weeks.

My first stop on Tuesday was to see my best friend from my former school, the music teacher Khairul. He has since moved to a different school, SMK Kompleks Gong Badak, which is closer both to his home and the city of Kuala Terengganu. I split a taxi with some other foreigners who were leaving the islands and had him drop me close by to the school. As I reached the entrance I had a student ask me if I was lost. Khairul came out to meet me and we embraced after two and a half years. He remains the same; outgoing, inquisitive, and talented musically. He introduced me to his students and I listened to the piece they have been preparing for the Gamelan competition in July. Gamelan is the traditional instrument that I grew fond of during my grant, and I had the opportunity to shake off the rust and play with the students. Afterwards, I sat around speaking with a few of them as various groups prepared events for teachers day, which was the following day. It was a pleasant warmup to my school, but I was eager to get back. Later that evening he drove me to Ajil, about ten minutes away from my school, where Madam Aisha had found me a home stay. I was greeted by Madam Aisha and her husband Ikhwan, their son Imded, and another teacher from my school Madam Surizan and her family. After I was settled in, we went out for dinner in Kuala Berang where I lived for ten months. None of the restaurants I used to go to were open so we went to a new one. There, we saw two white females wearing baju kurung and I knew they had to be ETAs. I said hello, introduced myself, and asked if they knew Caroline. We chatted about their schools and ETA experience thus far before I returned to my table. Another English teacher from my school, Madam Siti, heard that I was at the restaurant and came to say hello. We spoke about the turnover at the school, the state of Malaysian politics, and of course the sweet memories we share from my time there.

The following day Madam Aisha and her husband picked me up at seven to go to SMK Bukit Diman. I wore the best batik that I had brought, and sat in the front seat with small butterflies fluttering in my stomach. Every turn of the road brought flashbacks of my daily commute to school; familiar landmarks, smells, and scenery. We pulled into Bukit Diman and I got out. To my right, I could see my mural still in tact and (thankfully) retaining its color. In true Malaysian form, my first stop had to be the new principal’s office to introduce myself. Afterwards I went to the canteen to have breakfast and greeted the teachers there. There was audible whispering, pleasantries exchanged, and obligatory photos taken. It might be surprising to hear, but I think the English level at the school is even lower than when I was there. Even after three years the majority of students and teachers are still terrified to try to speak. No matter, I spent ten months navigating that and immediately returned to my old playbook of basic Malay, and short, choppy English sentences. Madam Aisha translated some of the complicated questions I received but most people just wanted to know how I afford to keep traveling. “You must have a lot of money,” was a common reaction.

After breakfast I toured the grounds with a few of my former students. The youngest two grades when I was at Bukit Diman are now the oldest two. The girls from the top Form 5 (oldest group) class were eager to speak with me. Most everyone else was just happy with being in my presence. They would quietly come and sit next to me, all while not saying a word and most likely not understanding anything. That was a common theme for the two days at Bukit Diman. I didn’t speak with a lot of folks, and certainly not in depth, but I could tell they were thrilled to have me back. I felt the same way. Sometimes things don’t need to be verbalized when there is a mutual understanding. I joined the teachers as they walked into the hall for the teacher’s day ceremony. At the last minute I was asked to give a short speech. The old Mr. Matt at the beginning of his grant would have been rattled, but I almost expected it at this point. There were songs, skits, a few karaoke numbers, speeches and gift-giving. In the back of the hall was a photo area with a ‘Selamat Hari Guru’ (Happy Teacher’s Day) backdrop and props to use. Random teachers would gently grasp my arm and lead me to where they wanted to take a picture. I remembered all of my old ‘freestyle’ poses. The next activity was a relay race and I was recruited to join one of the teams. While we were waiting to begin I was playing tacro (traditional game that is like volleyball with your feet) with some students and unbeknownst to me, I ripped my pants. One of the form 5 girls approached me looking like she had a secret of epic proportions to spill. I couldn’t get it out of her for about three minutes before she finally informed me about my pants. Although lengthy, thankfully the tear was on the underside of the pants and couldn’t really be seen. If it had been more obvious I imagine it would have been so scandalous that local news stations would’ve caught wind. “Coming up after an update into the investigation into the corrupt dealings of the prime minister, we have a tramautic and revealing episode involving a foreigner at a secondary school in Ajil. Stay tuned.” I played the pants fiasco cool and simply withdrew myself from the relay race. For the rest of the day I was cautious about how I was sitting and was able to keep things under wrap. 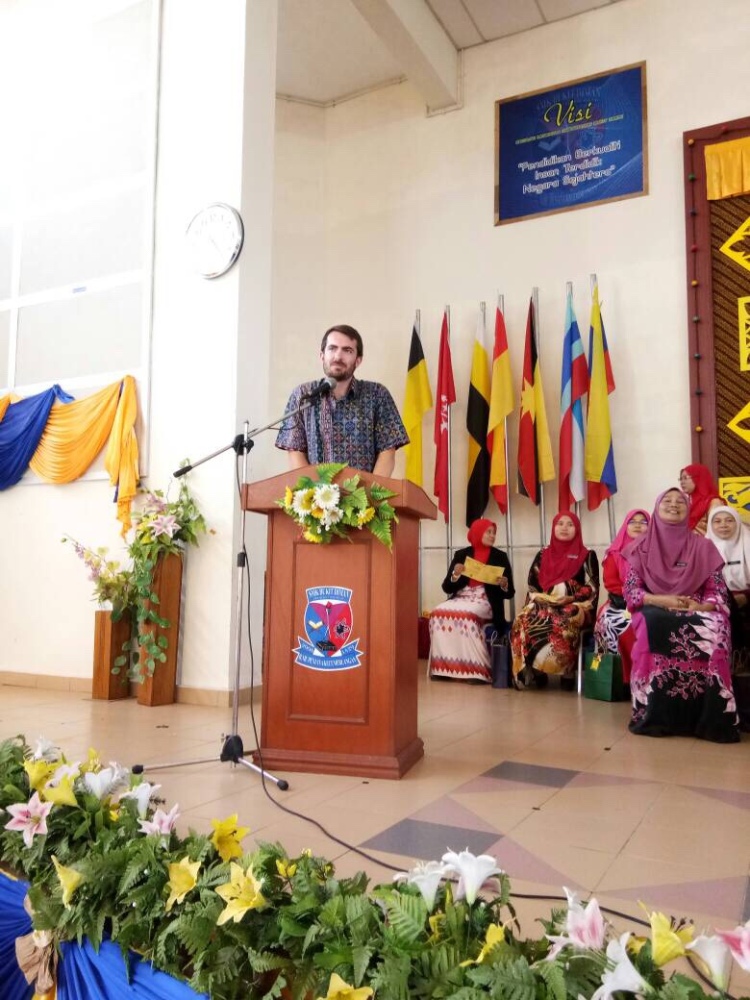 The following day, Thursday, was my second and final day at SMK Bukit Diman. It also happened to be the first day of Ramadan. I randomly picked two days to go back and visit my school and they happened to be two of the most important. All day I was asked the usual question of if I was fasting and, much to their disappointment, I told them I wasn’t. I fasted for one day in 2015 and still haven’t recovered. The no water is a truly tasking effort. Because of it being the first day of fasting, almost a third of the students were absent. The students who did come told me that the others were home sleeping because it “helps pass the time”. I spent almost the entire morning in the form 5 class with Madam Aisha speaking with them and assisting with a few of their English activities. I edited a few essays, and helped them with their SPM study packets. This November, these students will take the most important test of their lives (not an exaggeration) and it will determine if they can go to university and what studies they might pursue. Sitting there speaking with my former students Habibah, Nisa, Siti Aisha, Syakir, Najwa, Fatin, and others I felt so proud. When I was there I might have spoken with Syakir and Habibah but here were these others who had blossomed in the two years since I had left and were now more confident and knowledgeable in their English.

At the end of the day, we shared a bittersweet goodbye once again not knowing when the next time we would see each other would be. It’s hard for me to put into words how surreal it was to be back at Bukit Diman. I think about all I have done since Malaysia, and all that I did while I was there. It brings me great joy to know that Malaysia will always be the first country that I ever went to. And one day I hope to return yet again.

With a full heart, and even more memories, it’s time now to go see my sister and share in her unique Malaysia experience in the state of Sarawak on the island of Borneo.