The trek in Nepal almost didn’t happen. Our flight was supposed to arrive at 1:30pm and we had until 5pm that same day to go apply for our trekking permits at the center for tourism in Kathmandu. We had a bus leaving the following day to take us to Pokhara, which is the jumping off point for treks in the Annapurna Region of Nepal. The flight from KL left late due to some baggage that needed to be removed from the plane, but we still had plenty of time so there was no need to panic. Once we reached Kathmandu, however, there was a strong tailwind which prohibited the plane from landing and lead us to do circles for about an hour and a half. Other planes trying to land were stuck in a similar situation. By the time we landed and made our way through immigration and customs it was 4:15pm. With monetary incentives, I convinced our taxi driver to take us straight to the tourism board before dropping us at our hostel. We were able to secure our permits by 4:50pm. The third world always keeps you on your toes.

Neither Tommy nor I expected the level of poverty we witnessed in Nepal. I knew there had been a catastrophic earthquake three years earlier, but I figured it had been an opportunity for rebuilding and improvement. I was wrong. Kathmandu is a maze of smog, filth, and chaos. Most of the roads (in the capital city) are dirt, there are no traffic lights, and it genuinely appears to outsiders as a free-for-all. Even Honduras has more order. The first night we check into our hostel and explored the backpacker area known as Thamel where we bought some small souvenirs. Early the next morning we were on a seven hour bus ride to Pokhara, which I mentioned before. There was a stark contrast to the capital city. The roads were paved, the houses looked newer and more stylish, and it was cleaner. I learned that in a country where most of its income is derived from tourism, it can lead to inequitable distribution. Here was an area that received lots of money from trekkers and climbers and it was reflected in the infrastructure, unlike Kathmandu. Soon all this was behind us as we made our way to Nayapul, the starting point of the trek. Our taxi driver maneuvered his Kia over rocky, mountainous roads designed for more Land Rover type vehicles. At one point we had to get out and push so he could make it up the hill. At another we hit a bump and dislodged his rear bumper. All part of the adventure. 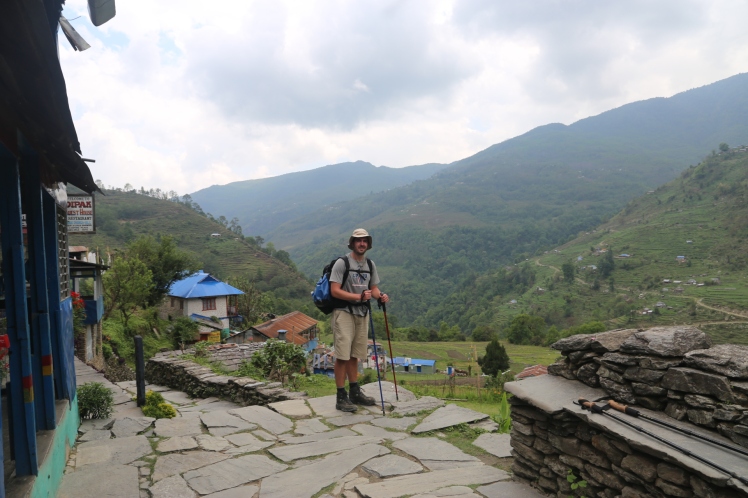 We began our four day trek on Sunday, May 6th at approximately 10:30am. Since we weren’t using a guide, we relied on an offline app I had found, appropriately named TrekkinginNepal, which would track our location and locate it on a map along side their suggested route. It was a lifesaver. Initially, we started off in the wrong direction before correcting ourselves. There was a checkpoint where you presented your permits and they recorded you entering the area. The first few hours were moderately uphill but not too challenging. It was a lot hotter than we expected and soon my gray t-shirt was a dark gray. There were two suggested stopping points for the first day, Tikedhunga and Ulleri. They were only an hour apart but the area between the two was straight uphill and navigated by over 3,400 stone steps. We decided to push ourselves and make it to Ulleri and save ourselves the pain the following day. Although our decision was the right one, our bodies paid dearly. With about 35lbs on our backs, it was a slow process up the steps. They seemed never ending, and we had to take frequent breaks to catch our breaths. As my Dad reminded me afterwards, my rigorous training program should have prepared me better (Hint: there was no training). As my calves, hamstrings, and feet ached I pushed myself knowing that at some point it had to end. It got to the point where I was almost sick to my stomach from exhaustion. Once we finally reached the top we checked into literally the first guesthouse we saw. Peeling the clothes from our sweat-soaked skin, we set them to dry and ate ravenously. That evening after a short shower we saw our first glimpse of the himalays. Their appearance provided us with the motivation that it would all be worth it.

The following day we trekked from Ulleri to Ghorepani. Ghorepani is the town nearest to Poon Hill, which we would climb for a sunrise and for which this specific trek is named. With the tortuous stone steps behind us, we set off optimistic that the worst had passed. But Nepal had other plans for us. Day two was also filled with incline, although it was a combination of steps and steep path. I drank between 3-4 liters of water each day on the trail and still felt that I wasn’t fully hydrated. We passed numerous waterfalls, terraced rice paddies, and towns built into the sides of mountains. Nepalis have to be some of the most fit people in the world. As we huffed and puffed up the trail we would be passed by school children who floated past us effortlessly without a drop of sweat to be seen. The smartest investment we made for the trek was renting hiking poles. They were invaluable both for the ascents and descents and helped to take the pressure off of our feet and knees. We arrived in Ghorepani by early afternoon and spent the rest of the day ingesting carbohydrates and resting knowing that the following day would our longest.

We woke up at 4:15am for the Poon Hill sunrise trek. It was about 45 minutes straight up the hill from our guesthouse, but without our heavy backpacks it was a breeze. There were probably a couple hundred other folks who joined us at the top of the hill for the view. We could see the silhouettes of two mountain ranges, one being the 7th tallest mountain in the world. As the sun rose, the majestic peaks came into view and validated all of our hard work the previous two days. For some, to see something so grand would make one feel small. On the contrary, I feel it helps me to appreciate all the beauty this world holds. The sunrise over the Himalayas will always be one of the most special moments I’ve had during my travels. Pictures and my verbose description won’t do it justice. You simply can’t comprehend their magnitude. I often tell people that a source of my spirituality comes from nature. These mountains were here long before mankind (sorry Justin Trudeau, no peoplekind here), and will be here long after us regardless of our best (or worst) efforts. There is a natural existence of beauty and tranquility that we can always return to. Tommy and I remained at the top for a couple hours before beginning our descent.

There was one more incline remaining after we returned from Poon Hill before the true descent began back to Nayapul. It was yet another grueling climb but offered more stunning views of the mountains. At that point we were up over 10,000 feet, but thankfully were not affected by the altitude. Then began the climb down which we were looking forward to. Yet again, our hopes were dashed as the descent was just as steep and taxing as the way up. We braced ourselves with the poles as we stepped down gingerly. One must go slow and step carefully to not put too much pressure on your joints. Sometimes it was on stone steps, other times it was a path. We left the mountains and entered more of a jungle scenery. We witnessed two monkeys who, with their gray fur and black faces, were fascinating. I believe they are called langurs. We made it to Gandruk, our final stop on the trek, just before a monsoon rain opened up. When I say just before I mean the second we got under cover the sky opened up unleashing rains, hail, and strong winds. Most nights we were asleep before 8pm and awoke before 7am. Some of my most sound sleeps occur after long days on the trail. On this day we had been hiking for almost ten hours and enjoyed a much deserved respite. 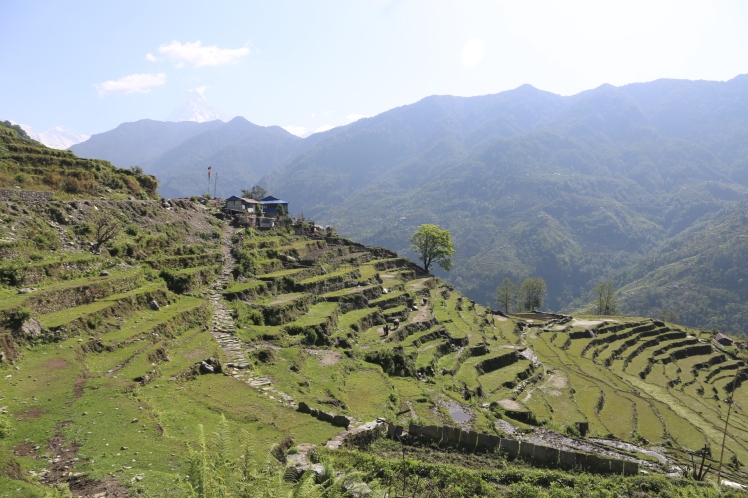 The final day was a mere four hour trek from Gandruk back to our starting point, Nayapul. Just as we were leaving the town of Gandruk we met some Nepali students whom we befriended. They mentioned that they were going all to the way to Pokhara for school and offered to give us a free ride on their school bus. We jumped at the offer, having heard that the public bus was both more expensive and extremely crowded. However, the operators of the public bus caught wind of two pale foreigners trying to get a free ride out of town and wouldn’t have it. An argument erupted between them and the students as we sat there in a stunned silence. Eventually we left not wanting to cause a bigger problem and walked most of the way back to the town. We did end up using the public bus to get back to Pokhara after walking a ways, and it was just as terrible as we had heard. For the first twenty minutes or so there were as many peoples as humanly possible stuffed onto a bus. My head was at a 45 degree angle due to the low ceiling and there were times both of my feet weren’t fully planted on the ground as the crowd of people swayed with the rise and fall of the bus.

Shockingly, this wasn’t the worst bus ride. The next day back to Kathmandu will be awarded that title. Not only was the seven hour ride more like a ten hour one, but I was seated next to a French version of Frank Gallagher from the TV show Shameless. He smelled like he hadn’t showered since Nepal became a sovereign nation. He was constantly picking at his skin and flicking pieces into other areas of the bus, and occasionally myself. A vegetable found behind one of the rest stops was declared to be his food for the day. His lungs expelled mucus from his years of smoking every half hour or so. At another stop he found a pair of gardening shears that he brought back onto the bus with him, and I told Tommy that this might be how I die. By this point in the blog you might be wondering if I even enjoyed Nepal. The answer is yes. Was it easy by any means? Absolutely not. But this is traveling. If you want to truly see the world you have to expect difficulties. Resorts don’t show you how the locals live. The U.S. and western Europe are anomalies compared to the rest of the world. You have to experience it to understand it. And for someone like me who will be studying international development, hopefully one day help it.

Next stop Perhentian Island off of the coast of Malaysia for some much needed R&R before returning to SMK Bukit Diman! Cheers and thank you for reading this lengthy post.