Backpack Matt is back! It has been a bit of a hiatus, but I am thrilled to once again have an opportunity to fill you in on a foreign adventure. I’ll be honest, I came close to shutting down the blog over the winter when I was facing my yearly subscription charge but something told me to retain it. Little did I know that in January I find out that I was headed to Stockholm, Sweden for the summer as part of the Wallenberg International Fellows Program. There are three fellows from Georgetown who are headed to Sweden for the summer and three from the Stockholm School of Economics who will spend their summer and fall semester in D.C. The three of us from Georgetown: myself, Christina, and Luis will be interning at Electrolux, Ericsson and SEB bank, respectively.

There will be an entirely separate post about Electrolux because there is so much to share. Additionally, the subsequent post will dive into more aspects of the Wallenberg Fellowship since there will be the five-year anniversary celebration next weekend. In the inaugural post about Sweden, however, I wanted to share a little about my first impressions of the place itself.

I took my last final on Friday, May 10th. My plan was to shoot home and do some packing before going out for the evening. The infamous Tombs bar and restaurant just happens to be located in close proximity to where I took my final and I had heard from a few friends that they were all meeting for a drink to celebrate the end of our first year. I naively thought I would go for a beer before heading home to pack. In the least surprising turn of events, I stayed for several and packing never materialized. In only three hours on Saturday morning, I packed for three months abroad, cleaned my room and organized everything for my sublessee. 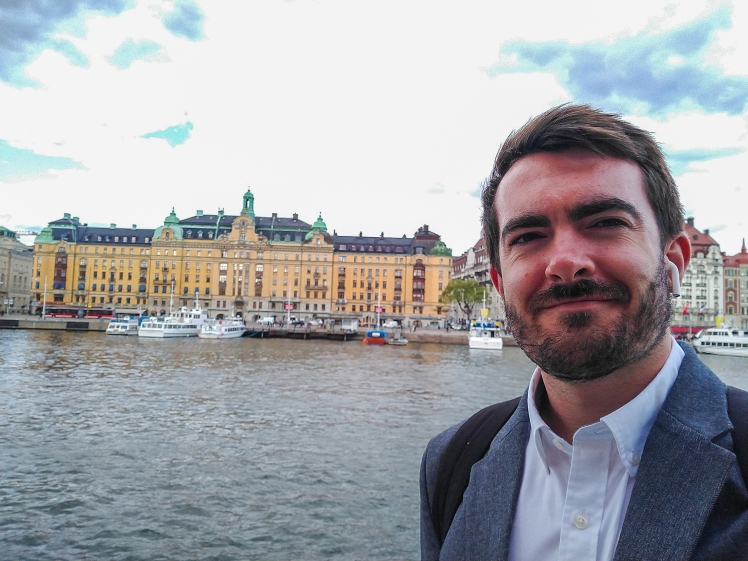 The momentum and optimism that I felt after accomplishing everything that morning without any setbacks were instantly negated upon arrival at the airport. My initial flight to Chicago had been delayed and I would now arrive too late to catch my connection to Stockholm. Over the course of an hour, a new itinerary was developed that would take me to Philadelphia, London and eventually Stockholm over the course of 30 hours instead of the original 15. Little did American Airlines know that I was sleep deprived from a week of finals prepping and spent most of the long journey with closed eyes and an open mouth slumbering peacefully.

When I initially applied for this fellowship I realized how actually little I knew about Sweden. Socialist paradise, great at ice hockey and curling, and neutral in the World Wars were my main talking points (the last of which has been rebuked since my arrival- more on that at another time). I expected everyone to be tall and blonde. People had told me that English was widely spoken and I will say that has definitely been the case. In my mind, there would be an Ikea on every corner and the most common profession would be furniture assemblyperson.

While some of those assumptions were not too far off, other elements of this society have taken me completely by surprise. For starters, the diversity in Stockholm was a pleasant surprise. Not merely that a brown haired guy can fit in, but also the clear mixture of ethnicities. Sweden has been extremely accommodating to refugees (a contentious topic in Swedish politics at the moment) and as a result, has a growing Muslim population as well as an established group from South America who came from places like Chile in the 1970s fleeing repressive regimes. As far as optics go, it appears just like the cities in the U.S. to which I’m accustomed.

Another Swedish characteristic that I had expectations for and still managed to underestimate is the efficiency of the city with regards to public transportation. To get to Electrolux from our apartment involves taking one subway line 3 stops, transferring, and taking another line for 1 stop. Door to door it takes me 20 minutes. There’s an app to see the subway times but it’s almost unnecessary with how often they run. If I see a train approaching and I’m still a way’s off, I don’t even quicken my pace since there were be another one in less than three minutes. I already presume that this will be the most difficult part about returning to D.C. in August.

Corresponding with the efficiency of the public transportation system is the urban planning that has taken place in Stockholm. For a sprawling archipelago of endless islands, it certainly has the feel of a cohesive, integrated area. Part of this is the ease of getting from island to island, and another part has to do with the islands themselves. There is an emphasis on green space and it seems like every cluster of streets has its own park. As the weather starts to warm for summer, all of the Swedes have been meandering along the streets, along the water, or within the parks. It really challenges the notion of the ‘concrete jungle’ as a representation for cities. Almost every day after work this past week was spent strolling along the water enjoying the outdoors well into the evening.

The final, and perhaps most jarring, aspect of Swedish culture has been the relaxed work environment. Before going any further I want to dispel the notion that relaxed implies unproductive. Electrolux is a thriving company with over $10 billion in sales this past year, but yet there is hardly an ounce of stress in the building. No one monitors my hours or comes by to make sure I’m aware of an approaching deadline. Everyone takes responsibility for their own parts of the job and simply handles it. Coming from the U.S. it has been quite remarkable to witness. Several times a day we have what’s called ‘fika’ (fee-kah) which is basically a coffee break that can take many forms. It can be used for socializing, having informal meetings, or really anything that you desire. Oftentimes it involves sweets too. Instead of my supervisor discussing my tasks at my desk we’ll just go ‘have a fika’ for a minute to discuss forthcoming tasks. At first, I marveled at how the Swedes managed to have this many cups of coffee per day without flying off the rails, but I have realized that there is a subtle art to fika-ing. Although I don’t drink coffee I still fika with tea and I’ve noticed that the Swedes never quite fill up their cup. Many times they don’t even finish what they have. Therefore, they can fika as often as they like without the worry of over-caffeination.

To cap off my first week in Sweden I visited the Drottningholm Palace, which is the official residence of the King and Queen of Sweden. Built in the 1600s, it has been expertly maintained. After having gone on a White House tour just a couple of weeks ago, at which I was disappointed by the scope and accessibility, this was a revelation. Practically the entire palace and grounds were open to the people. I joined an English tour and spent an hour in awe walking through the ornate rooms. It made me wonder if, although we’re incredibly proud not having a monarchy in the U.S., we lack some of the historical buildings that such wealth and power can afford because of this absence.

Once again I’d like to say how ecstatic I am to have another opportunity abroad to share with you all. Thank you for your readership, and I look forward to posting about my adventures here in Sweden. Cheers.