November is my final month with the English Opens Doors Program. On the 25th, I will share a tearful goodbye with my host family and return to Santiago. The following Monday, the 28th, I will be joined by my good friend Tommy from West Hartford, and we will depart for Patagonia. It seems like I am closing one book on Chile and opening another. The first will be filled with memories of my host family. Our late night asados (barbecues), which had me rumbling with hunger in anticipation, and filled to capacity afterwards. My host brother purchasing an American football so that we could have a catch and better explain some of the rules. Venturing into the rural interior of Chile with my host father, and witnessing his charm and genuine affection for others. Laughing with my host mom about the cat that fell through my ceiling after an especially strong earthquake tremor. Aside from all of those, one particular moment from this past Friday will remain with me forever. I was at the hospital with my host parents, anxiously awaiting the arrival of my brother Bryan’s daughter, Isabella. Unbeknownst to me, standing there with a camera and a foolish grin on my face, only two people were allowed upstairs so I had to wait in the main lobby. My brother came downstairs a little after 10pm to inform us the procedure had gone smoothly. I rode home with him from the hospital, just the two of us. He had a glow about him. A certain euphoric vibrance that accompanies the birth of a first child. I felt honored to share that moment with him. He told me that Isabella will always know about her Uncle Matt from the United States, and that my friendship meant a lot to him. When you travel there are certain people that enter your life for brief moments, and then drift away like a leaf floating in a stream. And then there are others who not only enter your life, but become a part of it.

I’ve had a few people ask me why I haven’t written more about my school or my students. “And where are the selfies?!” One worried reader questioned. The answer is multipart. The first is that these are students who are considerably older than the ones in Malaysia. The majority are not interested in selfies. When I am asked for a photo it is normally by a handful of teenage girls who make duck faces and push the boundaries of my personal space. I try to limit those. The other, and more prevalent reason is that I haven’t had as much time at school as I would like. I don’t think that I’ve had a full five day work week since back in early September. Every week there is some event that cancels class, or school entirely. In addition, there have been multiple strikes; an unfortunate reality of being a public servant in Chile. During a strike I am still required to attend school with the handful of other teachers not participating. They have just enough teachers to teach the highest grade so that they can still complete the school year. I usually spend a few hours reading about the horror show of the election in The States, teach a class I’ve never seen for about thirty minutes, and then head home. At first I wasn’t complaining because I could use the time to explore and learn, but now it has become a frustration. As I’m writing this, I haven’t seen some of my classes in over three weeks. Without continuity, repetition, and routine I can’t form decent relationships. I feel like I’m more of an idea than an instrument of change. I respect the need to stand up for yourself and what you think is fair, but the idea of ‘striking’ loses its significance when it become the norm. And most importantly, it’s the students who are really suffering here. 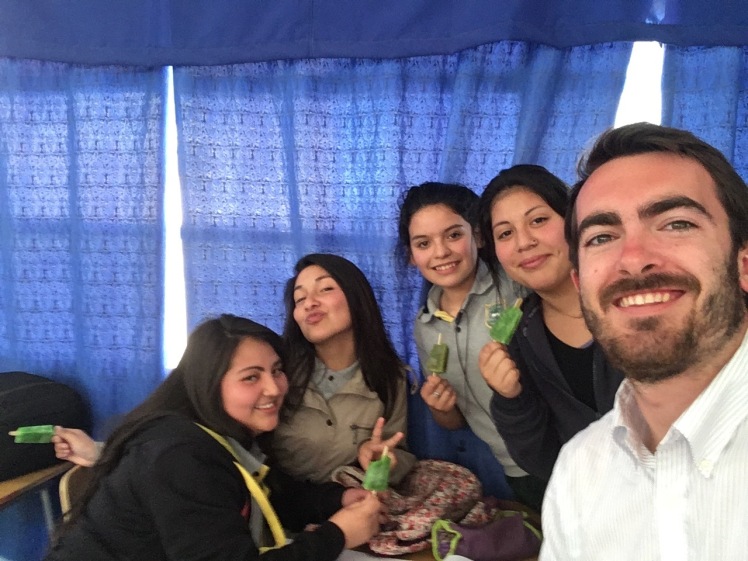 This past weekend was one of those previously mentioned where we were awarded Monday and Tuesday off for ‘feriadas’. I never actually found out why we had the day off, but I made plans with some other volunteers, my friends Joseph and Shuaib. With the help, and company, of Shuaib’s host sisters, Cone and Vale, we had an ambitious itinerary of sites to see. On Saturday we drove a couple hours to Punta Choros. We arrived at a desolate fishing village that appeared to be warming to the idea of attracting tourists. Just off of the coast is Isla de Damas (Island of Women), which is a National Marine Reserve. The fisherman who live there split their time between fishing and taking tourists out on boats to the island. Armed with my camera, extra lens, and GoPro we set off from the dock. The salt water air whipped through my hair and soothed my skin. Isla de Damas is what a zoo ought to be. All of the animals were in their natural habitat, completely undisturbed except for the snapping of a camera shutter. We saw flocks of all types of birds, sea lions, adorable little penguins, dolphins, and otters. The penguins hopped on shore with their wings spread out in a T as they maneuvered around. The sea lions, warming on the rocks, posed with their heads pointed straight up towards the sky. We’d only catch glimpses of the dolphin fins before they darted back underwater. After returning to shore, we found an empty beach just a ways up the road and basked in the afterglow of our boat ride. Joseph, Vale and I ascended the rocks at the end of the beach to take some precarious selfies.

The following day we left for Valle de Elqui. I had visited previously with Vale and Shuaib, but just for a day trip. This time we were joined by Joseph, and also planned to camp. This was going to be a test run for Patagonia. My backpack bulged and strained with the sleeping bag, and tent. It was evident very early on that I will need to be more efficient with my space moving forward. The best way to describe the drive through the Elqui Valley is magical. I was fascinated to learn that there is a buddhist monument in the Valley. I was told that Buddhists recognized a certain significance there and decided to honor it. Having visited many Buddhists sites in Asia, there is always a certain tangible aura accompanying them. The Elqui Valley is no different. You feel enclosed by the rocky, steep mountains on either side of you, but welcomed by the lush vineyards and shrubbery lining the shores of a snaking river. Many Chileans had the same idea to camp over the long weekend, so many of the campsites were full. We had to try several before a pleasant, older Chilean woman offered us an afterthought of a corner in her campsite. Using the brush behind the corner of space, we positioned our car and the tents as inoffensive barriers to the other patrons. We built a blazing fire with the endless supply of dry wood lying around. Joseph and Shuaib spiced and grilled the chicken. I kept the glasses of piscola (pisco + coca cola) full and the music light and melodic. Once the sun set Vale and I experimented with the settings on my camera. We attempted to capture the stars in a handful of long exposure nighttime shots. Using my headlamp we added artificial light to illuminate items or people in the foreground. I am grateful that my friends were willing to be test subjects who held their positions for 30 seconds in order to take the photo.

The final destination in our ‘Tour de Coquimbo Region’ was the city of Coquimbo itself. On the Chilean shoreline there are normally two cities positioned on opposite sides of the bay from each other. One usually is home to the port and history, while is the other is more modern. I wrote a blog post about Valparaiso, which has its sister city across the bay in Viña del Mar. Coquimbo is the port city to La Serena, where my two friends have been living. It was a mere 1000 pesos ($1.50) to take a collective around the harbor to Coquimbo. Our first stop was the mosque, which was unfortunately closed. Shuaib, who has been praying here, told me that a Moroccan king funded the mosque. Originally, Coquimbo wanted to have a trio of religious sites representing the three religions from the book (Christianity, Judaism, and Islam). At the same time this decision was made, the King of Morocco was looking for somewhere to build a mosque in South America. Although the synagogue was never built, the mosque is an architectural beauty whose pillar rises above the otherwise low level buildings surrounding it. I hope I have another chance to return and go inside. From there we walked down to the docks to visit the fish market. I was greeted by the same nauseating smell of stale fish that followed me everywhere in Malaysia. There were Sea Lions playing near the docks, jostling for position to receive any discarded fish parts. We enjoyed fresh fried fish (alliteration unintended) sandwiches a healthy distance away from the market and smells. The main attraction in Coquimbo is a giant cross that can be seen across the bay in La Serena. It was built in 2000 as a celebration of the 2000th birthday of Jesus. In a country of frequent earthquakes, this is a fortress. Using my knowledge of geometry, I could see the strength of the base made by forming triangles of giant cement blocks. You can climb to the top and observe the panoramic view of the ocean, cities, bay, and mountains in the distance. I stood on the stairs, high above the city, entranced.