The eighteenth or ‘dieciocho’ of September is the celebration of Chilean Independence. Referred to as ‘Fiestas Patrias’ , this day was highly anticipated and publicized. From the first day with my family I remember them talking about how great it would be (in a month’s time). Of course the aspect that was brought up repeatedly was the food. I was interested to see the level of patriotism displayed here in Chile. My family was eager to compare it to the 4th of July and learn about what constituted a proper celebration for us, Americans. I told them about my family’s tradition of being in Vermont surrounded by loved ones, the hunger inducing smells from the grill, and the blast of fireworks over the lake after sunset. For most of us, it is our favorite holiday of the year. There seemed to be the same palpable level of enthusiasm here. The Sunday before the celebration, I attended the weekly ‘feria’ or outdoor market in my town, Monte Patria. There I sought out a local vendor who was selling Chilean flags. I purchased a large, billowing flag that would be of ample length to be worn as a cape. With my flag and newly received ID card, I began to truly feel Chilean.

The first taste I received of the celebrations to come was on Friday the 16th, at school. All classes were cancelled and instead we had a day filled with activities and food stalls. I wandered around inquiring about the names of the traditional foods as students jostled for position to sell me items. Early that morning, as I was still half conscious, a teacher approached me with an earnest look and a brown folder. I knew that she was asking me for something, and she seemed to be in a rush, so I reluctantly accepted. Inadvertently I had agreed to be a judge for the Chilean traditional dance and music competition. My qualifications felt inadequate for this position to say the least. Each of the four grades (9th-12th) were assigned a region of Chile: north, central, south and Easter Island. From what I could translate on my rubric they were supposed to speak about their traditional outfits, the flora found in their region, and perform a choreographed dance that was accompanied by music. As their peers looked on, snapping photos or selfies (who can ever be sure?) the students gracefully illustrated examples of cueca, line dancing, and tribal chanting. The talented student musicians played traditional Chilean flute with lighthearted, rhythmic melodies. I was entranced as a fellow teacher’s fingers danced across the accordion. As a sort of halftime show during the competition there were a few activities for the teachers. I was recruited to join a 4v4 tug-of-war between the 9th and 10th grade teachers. I can say confidently that I singlehandedly propelled my side to victory and was immediately met with uproar from the opposition. Most of it was in a joking manner, but there was one legitimately upset female teacher who proceeded to bring it up later in the day. ‘Calmete’ (calm yourself) I thought to myself.

At the conclusion of the festivities I returned home with my host brother Bryan. There I was met by the entire extended family. My host father’s eldest children; a daughter Carolina, and son Richard had brought their families to celebrate. One of the most difficult tasks thus far in Chile has been determining how many children my host father has. I’ve been able to piece together that he has three children from a previous marriage, and three from his current. Carolina informed me that there are also, as she said, ‘illegals’ although an exact number was never confirmed. As I furrowed my brow and prepared to ask a follow up question, I thought better of it. Richard, the eldest son, is an entertaining fellow. He loves gambling and going to casinos. He’s mentioned visiting me in the U.S. but only if it were to be in Las Vegas. He is the only one of my host siblings that drinks heavily and took me under his wing so to speak. We began the evening with Budweiser, bought in my honor. Then we moved on to Chilean wine with dinner. That evening we had a huge slab of roast goat which I kept waiting to be served at the table. Eventually I caught on that everyone was simply ripping off strips straight from the grill. Talk about hands-on eating. Later in the night Richard persuaded a crew of about ten of us to head to a local karaoke bar. There we drank ‘terremotos’, a famous Chilean drink that translates to Earthquakes. You are advised to only have one as the sugar, and liquor that is subsequently disguised within the drink, wreak havoc on your system. Microphones were passed around and I would participate in the choruses of Chilean songs I have heard on the radio and grown familiar with. We ended the night with pisco; the strong, clear liquor mentioned in previous posts. Looking back on that night I realized I took the disadvantageous route of drinking, in terms of alcohol content, from least to strongest. The following day I was unable to leave my bed until 4pm. I was met with a mixed reaction of genuine concern and hysterical laughter. After ingesting all of the Advil in northern Chile, and a special ‘hangover’ soup from my host mom, Milene, I was functional once again. Richard left the next day to go visit other relatives, which thankfully spared me from any further binges. 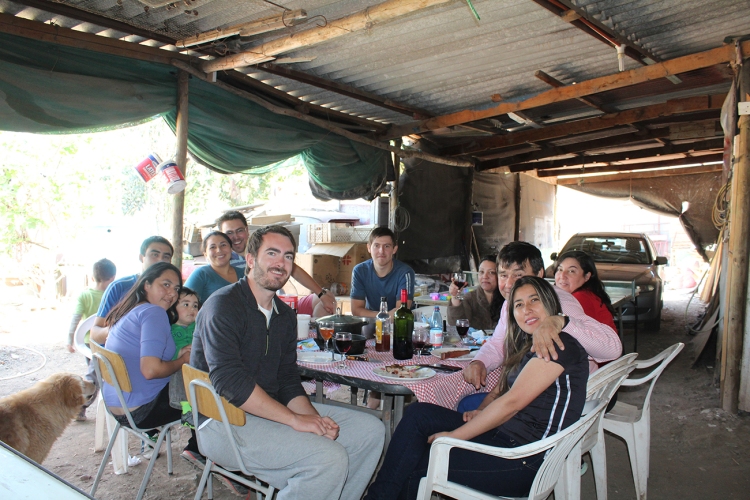 On Sunday the 18th, I awoke with independence fervor. I joined my host family for a light breakfast and then we drove into town for the parade. Before we left I tied the flag around my neck, looking forward to participating in the patriotism. When we arrived the only flags I saw were tied around flag poles. The only people wearing white, blue and red were a few in the parade. None of the people from the town were dressed in the colors of the flag. None were waving their own flags. I felt shocked and a bit foolish but in my time abroad I’ve grown quite used to being out of place. The parade was less than a half an hour long and quite underwhelming. I think most people just wanted to start eating. When we got back to the house I helped Bryan assemble ‘anticuchos’, which are the Chilean version of kebabs. He asked if we made them in the U.S. and I replied that we did, but with one slight difference. Whereas the Chilean version is comprised of four different types of meat and an insignificant, hidden fraction of onion and pepper, I said that our version has considerably more vegetables. He chuckled and proceeded to relay it to the rest of the family. The 18th will forever live in infamy as the day I consumed the most meat in a single setting. In addition to the kebabs there were chicken breasts, pork chops, and an array of vegetables that were an afterthought and eaten only for digestive purposes. Immediately following the lengthy lunch was a nap. Unable to sleep, I laid on my back taking labored breaths as I immediately regretted my amount of consumption. My family told me that one was expected to add a couple of kilos during dieciocho.

The biggest difference between Fiestas Patrias and the 4th of July is that the celebration is lengthier. We were on vacation from school the following Monday and Tuesdays so in total that gave us a full five days of celebrating, eating and drinking. My family also had another event to celebrate; my host father’s birthday on Monday the 19th. I purchased him a small picture frame and inserted into it a picture of us from one of our excursions into the countryside. Accompanying the picture was a smattering of broken Spanish that thanked him for his hospitality and told him how lucky I felt to be staying with his family. Seeing that Richard was no longer there, I was his drinking buddy for the day. We drank Chicha, a kind of fruity, less bubbly champagne, as well as plenty of wine. I took it easy in terms of food as I was still digesting the previous day’s. Bryan bought my host father spandex shorts and a neon pink shirt as gag gifts. David purchased him new speakers. My host brother’s and I played ping-pong late into the night laughing and playfully trash-talking. With red lips and heavy eyes, I drifted off into a deep, peaceful slumber. Surrounded my Chilean family, both immediate and extended, I felt included.

After being in Monte Patria for about a month straight, I’m excited to start doing some traveling to other parts of Chile. I will be visiting my friend Shuaib in La Serena this coming weekend. The following, I will be reunited with Max in the city of Valparaiso for about five days. During any free time at school I continue to scour the Internet in search of tips for the epic adventure that will commence at the end of the program. Life is simple, life is good.

One thought on “Fiestas Patrias”