One of the biggest challenges of living abroad is dealing with unintended consequences. When I was younger I used to panic about being on time. My dad would drive me to hockey practice and I had an ideal time in my head for when to arrive. It allowed me just enough time to get dressed and be prepared to take the ice at the exact moment when the Zamboni finished. If we were running even remotely close to that predetermined time I would be fidgeting in my seat, glancing constantly at the clock on the dashboard. My dad took to calling me ‘Wally worry wart’. That punctuality and desire for consistency has stayed with me. I was never late for a single college class. Granted there were some that I skipped or slept through, but if I went I arrived with time to spare. I’ve had to adapt over the past two years. I’ve constantly had classes inexplicably cancelled, teacher strikes, assemblies, and national tests. I’ve missed a flight and talked my way onto another well past the boarding time. In the Philippines, I bought my ferry ticket to the island of Cebu and made my way to the port only to find out it had been cancelled. Returning to Honduras from El Salvador, I was told there were no buses running on the day I needed to get back. All of this would’ve been too much for the old Matt. Maybe I’ve matured, maybe I’ve just become more adaptable. 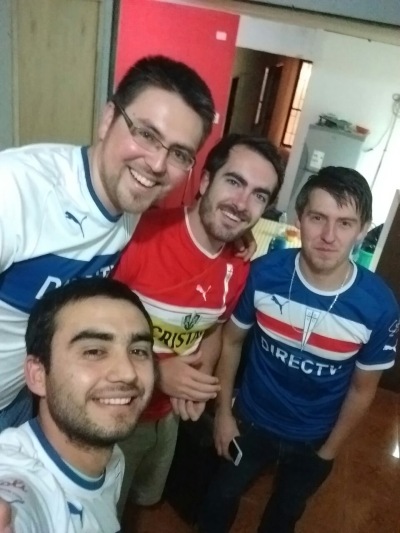 It’s only fitting after that introductory paragraph that I say the trip to Valparaiso (Valpo) almost didn’t happen. All week leading up to the trip I pestered one of my host brothers for two things; a haircut, and a bus ticket. Even though I now have a Chilean ID, I’ve had difficulty buying bus tickets online without a Chilean credit card. The haircut was provided in our backyard by a nephew who learned on Youtube. Up to that point he had only ever cut his own hair. After my host mother found out, she paced back and forth muttering ‘oh my God’ in Spanish to herself. My host brother was the self assigned photographer. Although up close my layers resemble rows of shark teeth, overall I was pleasantly surprised with the result. On Friday, the day I was supposed to leave, I approached my brother about the ticket. He said that he had been distracted and we would buy it now before heading to the bus station. The tickets were sold out. Unbeknown to us, there was going to be a massive festival in Valpo, Mil Tambores, which translates to a thousand drums. I tried to not let my frustration show. I’ve learned that internationally, people have an uncanny ability to read foreigners. In Malaysia, teachers would ask if I was alright after even the smallest sigh or purse of lips. My host mother in Honduras would ask if I wanted more food after catching me stealing the slightest glimpse at someone’s plate. Here in Chile, my family makes sure everything is OK if I’ve been quiet at the table for a few minutes. Normally I’m either still asleep in the morning or attempting to translate in the evening. My brother has been unbelievably welcoming towards me, and I really didn’t want him to feel any animosity. I assured him that everything was fine and went about finding an alternative route. I ended up having to go about five hours out of the way, but I was still able to arrive Saturday morning. Although I think he could sense my discontent, I made sure to send my brother a few messages throughout the weekend thanking him for his help and letting him know how much I missed the family.

Saturday morning, at the Valparaiso bus station, I was reunited with my good friend Mr. Max. I had visited his new home country of Peru in early August, and I wanted to return the favor and show him a bit of Chile. We are also planning to take an extended six week trip in South America beginning in January, which has been coined, ‘The South America Takeover’. After settling into our Air BnB apartment, we ventured into the heart of the city. The colorful vibrance of Valparaiso was visible everywhere. A turn down one alley lead to a stunning view of the port and the vast pacific ocean. Another turn and there were rows of polychromatic dwellings. In the historic quarter of Valpo, a UNESCO World Heritage Site, there was evidence of architecture influenced by Europe. Combined with modern murals and detailed street art, it was a pleasant balance of new and old, modern and antique. We spent a few hours wandering the streets, avoiding the throngs of tourists who hoarded the steps which read, “We are not hippies, we are happies.” We ate on the top floor terrace of a restaurant with a view of the entire city at our fingertips. Drinking sangria and eating a cheesy potato bread creation, we discussed how far we’ve come in the past year and a half and what the future holds. Max’s future is far more secure as he is committed to Newton College in Lima, and he writes passionately about his students in his blog which can be found on WordPress at Changes in L(attitude).

The following day was the culmination of the Mil Tambores festival. There was a parade held on the road directly adjacent to the port and coastline. It seemed like the entire city flooded to this area. The sea of people was endless, far in front and equally behind us. We met up with my friend Bash, a fellow volunteer from India, as well as another volunteer. You couldn’t escape the pounding of the drums. About every 100 feet or so there was another musical group, repeating a unique eight bar rhythm. Usually they were accompanied by a group of dancers, in elaborate costume, swirling effortlessly to the beat. What made this gathering so intimate was the lack of a divider. We were literally in the parade. There were a few occasions where I had to squeeze my way between performers in order to move ahead. I put my GoPro camera to good use, filming everything and everyone with one hand while holding a beer with the other. A true multi-tasker. The parade appeared to attract a variety of people. There were dreadlocked hippies advertising ‘magic’ brownies, painted topless dancers of both genders, drinkers, smokers, tourists, locals and everything in between. After two hours of taking in the musical acts, pushing and shoving our way forward, we escaped to higher ground for a respite. I was able to set aside my discomfort for large crowds for that amount of time but saw no need to return to the masses. We made our way to an infamous empanada restaurant, which featured over eighty flavors. Overwhelmed by the choices and overheated by the day’s events, we took forever to order.

On Monday, Max and I were pure Americans. We ventured to a bar we had visited earlier in the weekend in order to sample a variety of Chilean beers. The bar is named La Playa, located near the port and full of history. The owner (we presumed), told us that it opened in 1908. It had an old fashioned clutter. The walls were covered with posters of global icons over the years. There was a pair of tattered boxing gloves from the early 1900s. Seated on the back shelf of the bar were creepy antique dolls, whose eyes I kept waiting to follow me. On a top shelf was a collection of old fireman caps arranged chronologically. Max and I pulled out two stools from the bar and prepared to be there for a while. We sipped a local amber beer from Valpo named del Puerto and tasted a lager from down south in Patagonia. We both agreed that the best was the pale ale Guayacán, from the Valle de Elqui region. After several hours we stumbled out into the unforgiving and strong Chilean sunlight. Upon recollecting our meal the previous evening we returned to the empanada shop and devoured two more each. The final item on my Valpo bucket list was to visit another of Pablo Neruda’s homes. He has three: La Chascona in Santiago, La Sebastiana in Valparaiso, and a third named Isla de Negra which is further south along the coast. This home had a similar feel to the one in Santiago while being distinctly different. It also featured various collections; glassware, antique paintings and books. The downstairs area was home to a mural made from rocks in the form of a map of Patagonia. His bedroom held an encompassing view of Valpo, with a clear line of site well out into the ocean. The audio, which accompanied the tour, raved about his ability to host. This home was never devoid of laughter and entertainment. Seeing all of his trinkets, and hearing the stories behind each of every one of them further motivates me to continue my own collections. Although I won’t be transporting eighteenth century chests across continents, the currency, magnets, and artwork that I have acquired will make an enchanting addition to any future home.

I’m just about at the halfway point of my volunteer service. I have less than two months remaining before the real adventure begins. Upon the conclusion of the program, I will be embarking on an eleven day trek in Patagonia and following that up with a week on Easter Island, the most secluded island in the world. Although the excitement is already building for this epic quest, I need to remain focused on what matters for the next two months: my student’s learning and continuing to forge strong bonds with my host family.

One thought on “The Streets of Valparaiso”